The most expensive metal in the world 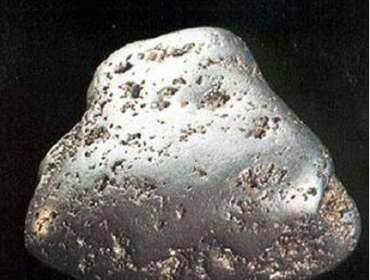 Do you think the most expensive metal is gold? No! On earth there are more valuable metals. But we need to divide the value of metals that occur in nature, and metals - isotopes, which are obtained in special laboratories. Let’s look at natural metals first.

The most expensive metal on earth is Rhodium. 1 gram costs about 225 dollars. Rhodium was discovered in 1803. In the world only there is a few tons of this metal. Every year only a few hundred kilograms are mined.

Rhodium is so expensive that it is used only in areas where it is impossible to do without. 98% of the metal goes to automotive catalysts. Therefore, the need for it grows by 10 times every year. Along with this, its extraction also grows. Two thirds of the rhodium mined in South Africa, the metal is also found in the Arctic, the Urals and Norilsk.
Rhodium has a silvery color with a bluish tinge. This metal is solid, resistant to oxidation and high temperatures.

Gram of platinum can be bought for 70 dollars. This metal was known in ancient Egypt and Ethiopia. At first platinum was taken for white gold, but could not use it because of difficulties in processing. The first metal began to be used by counterfeiters. Platinum was cheap, and heavier than silver and gold. In the middle of the 18th century, metal was recognized as independent one.
In nature, in its pure form, it does not exist. It can be found as an alloy with other metals - noble (iridium, palladium, rhodium, ruthenium and osmium) and no (copper, iron, lead, nickel, silicon). Platinum is isolated by heating in boilers with "royal vodka", i.e. a mixture of hydrochloric and nitric acid. Platinum is obtained in South Africa.

Grams of gold buy for $ 30. This is the main precious metal, which is accepted by the whole world. Gold is valued since ancient times. It can only be found in its pure form. The metal is ductile and corrosion resistant, homogeneous and compact.

Gold is the most malleable metal. From one gram it is possible to pull a wire for 2,4 kilometers. Gold is indispensable, as a conductor and material for electrical contacts. In microelectronics, conductors and galvanic coatings from this metal, connectors and printed circuit boards are used quite widely.

Metal is used as a target in nuclear research. It’s used in covering mirrors that operate on the far infrared range. It’s added to a special shell in a neutron bomb.

The main gold mining countries are the USA, South Africa, and Australia.

Its gram costs about 17 dollars. Metal was discovered in 1803. Iridium has a silvery white color and looks like tin. Iridium is solid, durable, brittle and one of the heaviest metals. Independently it is almost never used, but used as a ligature. 10% of iridium in soft platinum makes the metal three times stronger. This quality is used by jewelers as well.

By the way, iridium is used for the manufacture of standards of length and weight, as well as electrical contacts, chemical scales and surgical instruments, feathers for expensive pens. For a year around the world, about a ton of iridium is consumed. Huge amount goes to the chemical industry, the rest to catalytic processes, dental and jewelry alloys, the production of war lasers and crucibles.

The metal is obtained in South Africa.

The most expensive metal on Earth is Californium-252. Its gram costs 6 million 500 thousand dollars.

In the world there are only a few grams of this metal, no more than 5. On the planet, only two reactors can produce Californium  - in Russia and in the US. Each of them produces about 20-40 micrograms per year. In Californium-252 half-life is 2.6 years.

2 grams of metal per second secures 2.4 quadrillion neutrons. That is the same as a neutron flux of a conventional nuclear reactor. Classically, this effect can be obtained using 200 kilograms of radium. There is no such amount of the metal on the Earth. Now, Californium-252 is used in medicine to treat malignant tumors. Californium can replace the average nuclear reactor.

The most demanded of expensive metals is the isotope of Osmium - Osmium-187. Its gram is estimated at 10 thousand dollars. In nature, there is very little amount of this isotope. To get Osmium (this is a black powder with a purple hue) one should wait for 9 months.

Osmium is very fragile. It is used in the pharmacological industry as a catalyst in many chemical processes. It is also used for the manufacture of parts of measuring instruments.
Osmium is made in Kazakhstan. That country is the world leader in the isotope reserves.

Osme (smell) is a Greek word. It gave the name to that metal 200 years ago. It has an unpleasant irritating smell similar to a mixture of bleach and garlic.

In nature, pure osmium is not found. It can be found in minerals with another metal - Iridium. It can be met in the Urals, in Siberia, as well as in the USA, South America, Canada and Colombia.

Osmium is scattered and, therefore, very expensive. It is used only where a small effect can be obtained at low metal costs. In the United States, for example, about 100 kilograms of osmium are imported per year and used to produce cortisone. In the chemical industry, it is used to make catalysts.