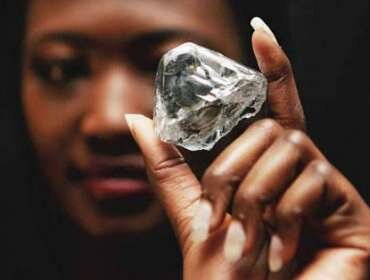 Diamond has been known for about 5 thousand years. Historians suggest that it was first discovered in India in river placers. It has long been credited with magical properties, and the largest famous crystals and products from them are shrouded in a halo of mystical legends.

India for many centuries had the monopoly on the supply of this extraordinary stone. There such famous diamonds as "Koch-i-Nor", "Regent", "Orlov", "Shah", etc. were found.
At the beginning of the XVIII century the Indian mines were already severely depleted. In 1714, after the discovery of diamonds in Brazil, the first diamond fever began. In a town called Diamantino thousands of prospectors worked. India ceased to be a monopolist.

In Brazil today, diamonds are produced annually with a total weight of about 400,000 carats (about 80 kg), but among them there are quite a few large ones.

In Russia, the first diamond was found in 1829. Somewhat later, river placers were found with a small number of small diamonds. Since 1867 diamond mining began in South Africa, from rich river placers, and in 1890 a sensational discovery of a new type of kimberlitic pipe deposits, also in South Africa, near the Kimberley settlement, occurred.

Diamond tubes opened new opportunities for mining. By the end of the first decade of the XX century in Africa hundreds of deposits were identified.