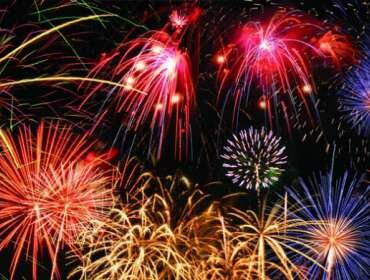 There is an assumption that the history of fireworks started in China, about 2000 years ago. It is possible that the Chinese accidentally discovered explosions by burning bamboo canes.

Probably the air inside the empty reed, expanded by heat, exploded. The ancient Chinese used fireworks to drive away ghosts or evil spirits, which they scared away with bright sparks, accompanying them with loud sounds. An ancient Chinese custom tells us to throw green bamboo on the embers during the Chinese New Year celebration to scare the evil spirit named Nyan.

Further development of the history of fireworks

The history of fireworks continued with the additions of pyrotechnical discoveries, such as various mixtures of chemicals, probably obtained by accidental interaction with gunpowder. After mixing and heating these substances, the result was an explosion that produced bright lights and loud sounds. The Chinese were intrigued by their discoveries, so they continued to study various combinations of chemicals to develop the effects of the powder mixture.

They also started to insert the chemical compound (gunpowder) into the hollow reeds of bamboo and then tossed the reeds into the fire to light them up. This method led to more powerful explosions of spectacular light flashes. Soon the Chinese discovered that they could change the chemical composition to get a faster ignition, producing explosions louder than the previous ones. Later it turned out that the method used to ignite gunpowder, can also change the way it exploded, whether it was ignited in a closed container or container with an open edge.

Marco Polo was the first to surprise the whole Europe with fireworks. With this introduction, Europeans passed the invention for military achievements. As a result, guns and machine guns were developed using black powder. Chemists continued to work on powder formulation in order to make the explosion bigger and stronger. So cannonballs filled with gunpowder became common.

Participation of Italians in the history of fireworks

The Italians used fireworks for a different purpose. Instead of thinking of them as military weapons, they saw on this background a form of art. The Italians developed air shells that were launched upwards for spectacular explosions.

In the modern world of pyrotechnics you can see almost all colors. New technological achievements have allowed receiving a variety of loud sounds, bright lighting, much more impressive than previous explosions.

The history of pyrotechnics can help you evaluate its humble beginnings, as well as the evolution in time, so that it became possible to get an unforgettable spectacle at your celebration!