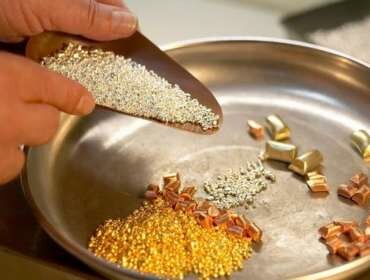 Metals have been used by people since ancient times. All the time the process of obtaining them was improved, useful alloys of various metals appeared. Let’s look at interesting facts about metals.

In ancient times, when melting silver, Norwegian smelters often received poisoning. They explained it by the machinations of an evil spirit, called Kobold. In fact, the fault was due to the toxic arsenic oxides that were released during the burning of cobalt minerals.

German miners in ancient times were overcome by a spirit called Nickel, which prevented them from extracting copper from ore very similar to copper. Later, in the XVIII century, people learned to allocate a new metal from this ore. It was named after the mythical spirit - nickel.

For centuries, gold was considered the most expensive metal. For a long time, alchemists could not stop trying to produce gold from different components. Luck smiled to the researchers in 1941. For that the Americans Bainbridge, Scherr and Andersen had to bombard the mercury atoms with fast neutrons. Unfortunately, the obtained gold turned out to be radioactive.

Speaking about interesting facts about metals, it should be noted that mankind for its entire history extracted 165 thousand tons of gold. Interestingly, half of this gold was received in South Africa. If all the extracted gold is poured into one ingot in the form of a cube its side will be 20 meters.

Of all the appliances that adorned the dining table of Napoleon III, the most expensive ones were made of a new and rare metal - aluminum. At solemn meals, these utensils were served only to the emperor and his most distinguished guests. Other participants of the feast had to be content with devices from the usual gold and silver.

Sea water contains in the dissolved state all elements of the periodic table, there are even uranium and gold there. Modern technologies allow producing on industrial scale from sea water only four useful substances: fresh water, salt, magnesium and bromine.

In astrophysics there is the concept of metallicity, which characterizes the relative concentration of elements heavier than helium in the composition of galaxies and stars. Metallicity indicates the age of the stellar system. The very first stars in their composition had practically no metals. With each successive generation of stars the concentration of metals in them increased.

Aluminum oxide, which is a thin protective film on its surface, is easily destroyed by mercury. Without this film, aluminum is rapidly oxidized in air. Therefore, mercury is forbidden to be transported in airplanes: a hole may be formed in the fuselage of an aircraft during its spill.

The word platinum from the Spanish language is diminutive of the word "silver". In a word, the conquistadors expressed their disdain for this metal. This is explained by the increased refractoriness of platinum, so it was estimated to be half that of silver. Now the price of platinum on world markets exceeds the price of silver by almost 100 times.